Arthur and the Yeti

Product Code
9781907912184
I'm Arthur and I'm seven, and last Saturday, at my grandparents' house, we all got a bit of a fright. Before we knew it, the whole world had come to see the Yeti of Picket Lake."This is a super little book suitable for more able readers in KS1 upwards. It's a fun easy adventures, a very good series for the target age group" THE SCHOOL LIBRARIAN 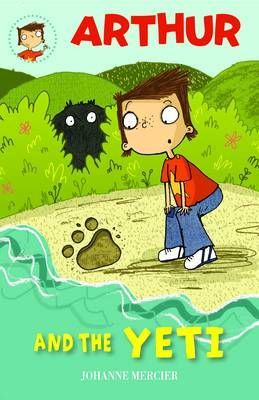 Arthur and the Yeti
Description
I'm Arthur and I'm seven, and last Saturday, at my grandparents' house, we all got a bit of a fright. The night before, the neighbour heard strange noises coming from her garden and she saw two big, black eyes staring at her. There was only one thing for it: Grandma phoned Cousin Eugene. Before we knew it, the whole world had come to see the Yeti of Picket Lake.Arthur is a seven-year-old boy who is brilliant at being a seven-year-old-boy. When Arthur visits his grandparents' house by the lake, more often than not, he becomes entangled in a new adventure, which he must solve with the help of his pet duck and useless dog - and hopefully without too much help from eccentric Cousin Eugene. These are witty stories full of understated humour and populated by quirky yet recognisable characters, and narrated by Arthur who has the rational worldview that comes exclusively from being seven-years-old. - REVIEWS - "This is a super little book suitable for young readers. It's a fun story suitable for more able readers in KS1 upwards...Arthur is staying with his grandparents when their neighbour Mrs Potter encounters something strange in her garden.Fearing a monster may be lurking next door, Arthur's student cousin is called in. Collecting clues, cousin Eugene soon declares that the monster must be a yeti...but is it?" -- THE SCHOOL LIBRARIAN. "A great little series for newly independent readers. Short and simple, yet engaging and fun, this is a perfect series for children to try to attempt on their own. The illustrations help break the text and help set the humorous atmosphere. Arthur is a loveable and quirky character who will appeal to both boys and girls." -- LIBRARY MICE. "Mercier's warm and reassuring series about a boy who's brilliant at, well, being a little boy of seven who loves his family and sharing his adventures is proving a popular choice for early readers. Full of understated humour which is so appealing to growing boys. With bold, lovable characters and stories to enchant and entertain, all brought to life by Clare Elsom's quirky illustrations, the witty, wonderful adventures of Arthur and his merry menage are set to run for a lot longer." -- LANCASHIRE EVENING POST. "Seven year olds will thoroughly enjoy this lively series of books which take a perceptive look at the world as seen by a seven-year-old."-- PARENTS IN TOUCH.
More Information