I have been asked to write a little something about our exciting new poster pack. Now seems a very good time to climb to the very top of Badger Towers to shout out across this land that now, more than ever, should be a time to embrace and celebrate our differences. We have many poster packs that celebrate people that can be seen as role models for our younger generations to admire, and more importantly, to learn from.

We have sold hundreds of role model packs and seen them grow from two sets to 11! We have had many teachers and librarians thank us for providing them with quick and easy classroom and library resources.

The idea for our LGBT Pride (lesbian, gay, bisexual and transgender) poster pack was born in the Spring of this year. We know of no other poster pack like it, and are proud to be able to release it into the wild.

The LGBT community has seen many changes over the past few years in Britain. The legislation to allow   same-sex marriage in England and Wales was only passed by Parliament in July 2013 and came into force on 13 March 2014. I believe Scotland got there first by legalising same-sex marriage in February of the same year.

Britain has helped lead the way for more equality for these communities. It wasn’t too long ago that being gay was against the law in Britain. It seems alien to most that people were persecuted for who they decided to have relations with. Of course prejudice still exists but bridges are continually being built. A great recent example of this was seeing London’s first Muslim Mayor happily stand side by side with the LGBT community during June 25ths Pride march.

Our LGBT poster pack highlights some of the leading role models that students and teachers will be familiar with. We have people from all walks of life and all careers. From TV presenters to singers. Writers to Olympic athletes. People are feeling more confident about coming out, expressing who they are and, as a whole, the general public are more accepting. The tragic shooting in Orlando shocked America and the wider world. The actions of what seems to have been a very confused man brought on Americas worst ever mass shootings. Such hate is hard to comprehend and I can imagine it’s even harder for a child to understand. How do you explain it?

Now, more than ever, we need to educate our younger generation and show them that homophobic attitudes and slurs are not the answer. Through education we can celebrate the differences the human race has to offer. 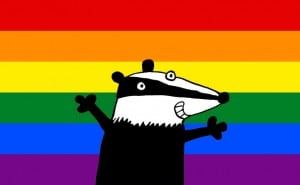 Below is a list of the famous faces that feature in our LGBT Pride Poster Pack. To find our more about this selection please click here.

We have several other Poster packs available, please click on the titles below to view that particular selection, or alternatively view our full range here.