Product Code
9780713679915
Chief Thunderstruck is in big, big trouble. He's trapped in a cave by a vicious polar bear, and time is running out before he's going to be the bear's breakfast. But when help finally arrives, it comes from the most unlikely of places... 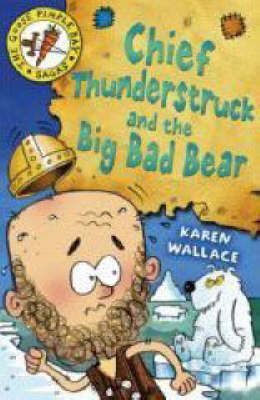 Chief Thunderstruck and the Big Bad Bear: Bk. 4
Description
Set in the Viking world of long boats, looting and grand adventure, The Goose Pimple Bay Sagas relate the hilarious tales of a noble family with a difference. In the final book of the quartet, a message reaches Goose Pimple Bay that Chief Thunderstruck is in trouble. He's been trapped in a cave on an ice flow by a fierce polar bear, who has a nasty glint in his eye when he looks at Chief Thunderstruck's bearskin coat. Together Whiff Erik, Spike Carbuncle and Fangtrude sail off to the rescue. But it's up to Fangtrude, being part wolverine, to save the day.