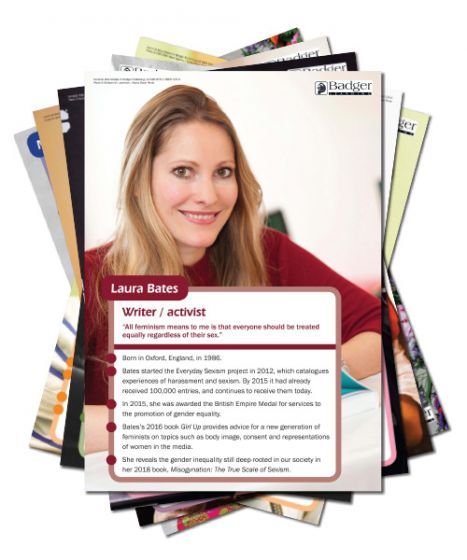 Each of these 10 posters features a positive feminist role model, along with a quote and short biographical details.

Laura Bates - Writer / Activist
"All feminism means to me is that everyone should be treated equally regardless of their sex."

Sylvia Pankhurst - Activist
"...may we, men and women together, not in antagonism, but in comradeship, strive on till we have built a better civilisation than any that the world has known."

Shami Chakrabarti - Politician
"Gender injustice may be the greatest human rights abuse on the planet."

Frida Kahlo - Artist
"I never paint dreams or nightmares. I paint my own reality."

Emma Watson - Actor
"No country in the world can yet say they have achieved gender equality."

Dr Rosalind Franklin - Scientist
"Science and everyday life cannot and should not be separated."

Angelina Jolie - Actor / Humanitarian
"There is no greater pillar of stability than a strong, free and educated woman, and there is no more inspiring role model than a man who respects and cherishes women and champions their leadership."