The Legend of Frog

Product Code
9781847153883
When Prince Frog ventures beyond the End of the World to claim his throne, he finds Princess Rainbow is already wearing his crown and a royal rivalry ensues. 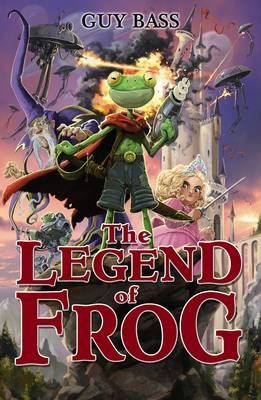 The Legend of Frog
Description
The Legend of Frog is the first book in a brand new three-part series by award-winning and best-selling author, Guy Bass (Stitch Head and Stitch Head: The Pirate's Eye). A mash-up of fairy tale, fantasy and science fiction with a hearty helping of humour, The Legend of Frog is sure to introduce Guy to a whole new raft of readers as well as delighting his legions of fans. Prince Frog is convinced he's destined to rule the world ...the trouble is, the world has ended. Undeterred, Frog sets out to claim his crown, armed with nothing more than a pair of Catastrophe Pants and his trusty stick, Basil Rathbone. But Frog soon realizes that the world isn't quite as ended as he thought. He discovers a magical kingdom, filled with wild landscapes, strange creatures ...and a princess sitting on his throne. Together with his new friend, Sheriff Explosion the sheep, Frog seeks to prove his princeliness and escape the clutches of the princess who's sure he'd make a better pet than a prince. But just when Frog thinks things can't get any worse, he discovers he is actually the prince of an invading alien army and that he's just given the go-ahead for an all-out alien invasion.Can he and the princess put aside their differences long enough to save the kingdom - and the world? It's time for Frog to decide whether to be a prince or a hero?
More Information