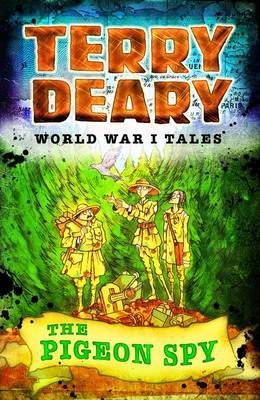 The Pigeon Spy
Description
Stories of the First World War from the bestselling Terry Deary, author of the hugely successful Horrible Histories. Flanders 1918. The extraordinary true story of a pigeon who saved nearly 200 lives. A troop of Americans are trapped behind enemy lines. Not only are their German enemies firing at them but so are their own side. Somehow they have to get a message to their comrades. The only way is by pigeon. But every time a pigeon rises in the air it is shot down. The last pigeon, a black bird called Cher Ami, flies with bullets zipping through the air all around him, covering 25 miles in just 65 minutes, helping to save the lives of the 194 survivors. In his epic journey he is shot through the breast, blinded in one eye, and left with a leg hanging only by a tendon. Army medics save his life. They can't save his leg, so they carve a small wooden one for him. When he recovers, the pigeon is put on a boat to the United States, a hero. Astonishing true tale of animals at war from master historical storyteller Terry Deary, for 7+.
More Information