Product Code
9781447279785
Book Bands:
Laugh-out-loud adventures in the wackiest treehouse EVER! The first in a highly illustrated series for fans of Diary of a Wimpy Kid and Barry Loser. 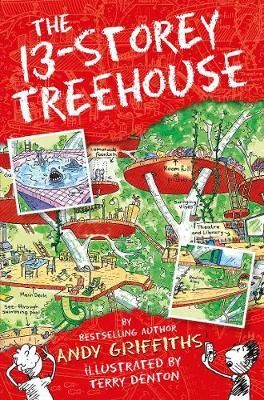 The 13-Storey Treehouse
Description
Andy and Terry live in the WORLD'S BEST treehouse! It's got a giant catapult, a secret underground laboratory, a tank of man-eating sharks and a marshmallow machine that follows you around and shoots marshmallows into your mouth whenever you're hungry! Just watch out for the sea monkeys, and the monkeys pretending to be sea monkeys, and the giant mutant mermaid sea monster ...Oh, and, whatever you do, don't get trapped in a burp-gas-filled bubble ...! Andy Griffiths and Terry Denton's fantastically funny The 13-Storey Treehouse is told through a combination of text and cartoon-style illustrations.
More Information